Korean companies are cutting investment as global economic turmoil forces them to rethink their rapid expansion.

Major companies rolled out medium- and long-term investment plans totaling more than 1 trillion won ($770 billion) after Yoon Suk-yeol’s inauguration in May. But they are revising the plans due to economic challenges including high inflation, rising interest rates and a falling won.

LG Energy Solution, a Korean battery maker, said it will “reassess” its proposed 1.7 trillion won battery factory in Arizona on June 29. The original plan, which was announced in March, was to begin construction in the second quarter and begin operations by the second half of 2024.

“We are closely reassessing the timing, amount, transactions and other details of the investment, but nothing has been decided yet,” a spokesperson for LG Energy Solution said. 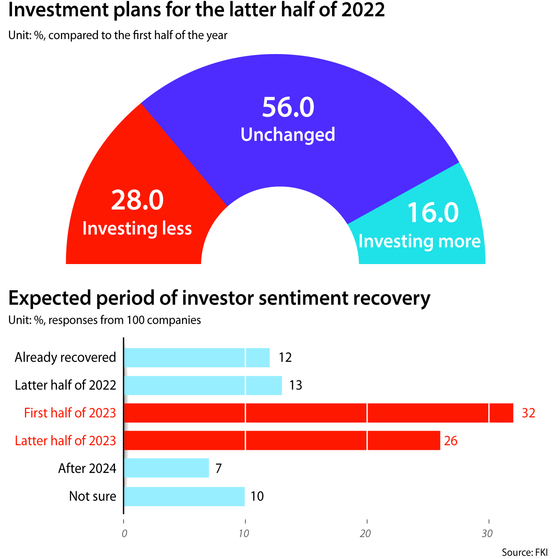 Other companies also have doubts.

Among 100 large companies in Korea, 28 percent responded that they plan to cut investment in the second half compared to the first, according to a survey conducted by the Federation of Korean Industries (FKI) from June 7-14. Only 16% responded. they will increase investments in the second half.

As for the reasons why companies are reducing their investments, 43.3% said global economic instability.

High inflation, the unstable global economy and ongoing supply chain disruptions from the Russian-Ukrainian war are the top three factors companies see as the biggest risks to investment expansion.

“Many efforts, including the new government’s improvement of the corporate tax system and cooperation with other countries in sourcing raw materials, should be made to restore investors’ confidence,” he said. Choo Kwang-ho, head of the economic research division of the FKI.

“There should be measures for these small and medium enterprises so that they are not hit hard by the shrinking economy,” said a spokesperson for the Korea Middle Market Business Federation.

“The government should make efforts, including reducing taxes and reforming regulations and the labor market, because less investment will create fewer jobs and negatively affect the economy,” said Sung Tae-yoon, a professor. in economics at Yonsei University.

Some large companies, such as Hyundai Motor, have chosen to invest more to expand their presence in the global market.